Skip to main content
Your browser has javascript turned off or blocked. This will lead to some parts of our website to not work properly or at all. Turn on javascript for best performance.

The browser you are using is not supported by this website. All versions of Internet Explorer are no longer supported, either by us or Microsoft (read more here: https://www.microsoft.com/en-us/microsoft-365/windows/end-of-ie-support).

Please use a modern browser to fully experience our website, such as the newest versions of Edge, Chrome, Firefox or Safari etc.

The purpose of the research is to systematically determine and characterize the processes involved in the build up of the Nuclear Star Cluster of the Milky Way and the surrounding central structures, and to investigate the consequences and implications for our understanding of the formation engines of galaxies in general. By studying the present day chemical state (i.e. the relative abundance of elements) of different stellar populations and different substructures, it is possible to recover their unique evolutionary histories. This is sometimes called Galactic Archaeology, or better Galactic Geology. Just like artefacts and rocks are observables for the archaeologist and geologist, the chemical compositions of stars are the observables for an astrophysicist. Analysing these compositions with a range of advanced models, we will be able to constrain key evolutionary processes such as the in-situ star-formation history and its efficiency, the distribution of masses of new-born stars, history of infall of gas and large stellar systems, the role of minor and major galaxy mergers, and secular evolution; ingredients we need to unravel the assembly history of the Galactic center and its nuclear star cluster.

I am involved in research investigating the origin of the elements and especially the chemical evolution of the Galactic Bulge. Observations of Bulge stars at IR wavelengths have been done with Gemini/Phoenix and VLT/CRIRES.  Red giants are very luminous stars and are useful as probes for galactic and extragalactic studies, for example, bulge studies. Thus my experience and knowledge of infrared spectroscopic studies of the atmospheres and stellar winds of red giants, which has been reported in several papers,  is of relevance to my planned research. 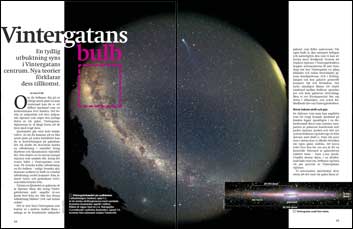 I am engaged in near-infrared studies of the chemical evolution of the Milky Way. Especially, I am studying the behaviour of fluorine, carbon, and sulphur. With data from the McDonald, Kitt Peak, and Gemini South Observatories,  I am studying giants and solar-type stars in order to discern the origin of fluorine, sulfur and the life-baring atom carbon.

Sulphur is an important element since it can be used in the study of the chemical enrichment of damped Ly-alpha systems, believed to be embryonic galaxies in the early universe. However, it is a difficult element to study due to the rarity of suitable spectral lines at low metallicities. In spite of these difficulties, I was able to show that sulphur is safe to use for such studies, despite earlier claims to the contrary, and that its behaviour is as expected for an alpha  element.